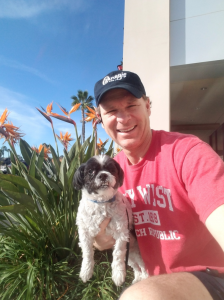 Former President of AMI Hospitality, Aaron Smith, welcomed furry friends in the office long before the trend of dog-friendly workspaces was popular. He believes employees at his interior finish company will be encouraged to adopt more animals who are in dire need of a loving home. Having the flexibility and freedom to care for pets while at work is both a fun and life-saving perk.

Studies have shown that having pets in the workplace is also of great benefit to the health of employees. It makes people happier, lowers stress levels, and improves productivity. Better communication in the office is also a great perk, as pets promote new interactions that may have otherwise never happened. Aaron Wesley Smith believes that dog-friendly workspaces keep spirits high while providing a good work-life balance.

For the past two decades, Aaron Smith has rescued dogs while supporting the SPCA. According to www.aspca.org, approximately 1.5 million pets are euthanized every year in the United States. Without the donations of animal activists like Aaron Smith, shelters would be unable to provide services the community relies on. The workplace pet policy also supports shelters by helping them place animals into homes.

Unfortunately, it is common to see good pets abandoned. Many rentals do not accept pets, putting people in tough situations when it comes time to move. Other families find themselves overwhelmed with responsibility after having children and cannot properly care for the animals. Aaron Smith and his wife Tania have committed to saving as many dogs as possible by supporting foster care programs and supporting and funding much needed medical care to pets in poor health.

Together, they continue to save countless animals from death and often choose the dogs that are least likely to get adopted. When Flash arrived at the SPCA, he had many health issues and only one eye after suffering from beatings and abuse. At 12 years old, Flash had extreme anxiety and could not be left alone for long. Aaron Smith and his wife Tania saved Flash, welcoming him into their home to receive unconditional love. It is common for good pets just like Flash to be put down because they need special care. Aaron Smith tries to combat this unfortunate circumstance through his furry friend policy at every company he is involved with.

Now located in Orange County California, Aaron Smith continues to be an advocate for rescue dogs and the organizations that support them. The bond and warmth of a rescue dog is like no other, which is why Aaron and his Tania Tomyn will continue to adopt and care for neglected animals in the Southern California area.